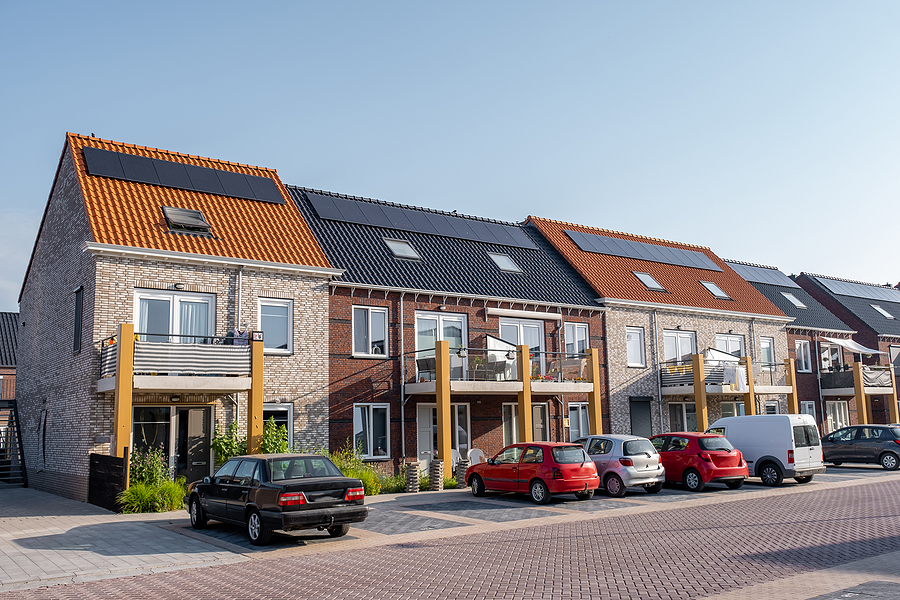 A 2016 Stanford-led research study made the case that the power produced for electricity, transportation, heating/cooling, and industry could potentially be 100% produced by wind, water, and solar power by 2055. As policymakers and the public begin to get on the same page about the critical need to prioritize renewable energy legislation, we can see what changes are happening now and get a glimpse into what the future holds. In this article, Green Development LLC, a leading developer of large-scale renewable energy projects in Rhode Island, shows us what a future with net-zero carbon emissions might look like.

In January 2020, California issued a mandate that requires all newly constructed residential buildings under four stories high to be equipped with solar panels. A similar bill proposed in Massachusetts would apply to new homes, apartments, and office buildings. As of January 2023, all new commercial and high-rise residential buildings in California will also need to install a battery storage system as part of a required solar energy installation, according to a bill passed in August 2021. The bill is awaiting final approval by the state’s Building Standards Commission.

If this trend continues—and a campaign from Environment America, a national network of 29 environmental groups, is rallying for ten additional states to adopt similar mandates by 2022—solar panels on our homes may quickly become the new normal. Homeowners are increasingly choosing to pair batteries with rooftop solar installations to store electricity for later use, such as during the evenings, cloudy days, or power outages.

Corporations are not exempt from these initiatives. In addition to state mandates, Environment America is also calling for “big box stores,” such as Walmart, to add solar panels to their rooftops and parking lots. Among those leading the way, Ikea has already installed over 900,000 solar panels on its stores worldwide.

The North American Supergrid (NAS or “supergrid”), now in the planning stages, will make it easier to transport distributed energy from wind, solar, geothermal, and hydropower across the lower 48 states. The supergrid would add a new layer—an underground, direct-current transmission network on top of the existing infrastructure. Existing or new microgrids could serve as the building blocks of the new grid, providing resiliency and serving the local market.

Wind and solar power are known as variable resources because our access to them depends on whether wind and sun are available at any given time. In addition, production potential and demand for renewable energy vary widely across the country. Estimates from the National Renewable Energy Laboratory suggest that the U.S. offshore wind has a technical resource potential of producing almost double the current electricity use for the entire country, but transferring this energy across the existing above-ground powerline infrastructure is inefficient and expensive.

With the ability to transport renewable energy quickly and efficiently across the country, the variable nature of wind and solar power will no longer be impediments to consumers. Day or night, cloudy or sunny, windy or still, the supergrid will be able to transport electricity generated from these renewable energy resources across the country in a fraction of a second.

Researchers are developing efficient ways to extract carbon dioxide from the atmosphere, combine it with water, and turn it into fuel for vehicles and aviation. Vehicles will effectively be carbon neutral, releasing about the same amount of carbon that was extracted from existing carbon in the atmosphere. This ultra-low carbon fuel can be used to replace gasoline, diesel, and even jet fuel.

Carbon Engineering is at the forefront of this initiative. It is currently building direct air capture technology facilities that will each extract one million tons of carbon dioxide from the atmosphere per year, equivalent to the carbon dioxide absorbed by 40 million trees. The carbon captured is then either stored underground to keep it out of the atmosphere or converted into a nearly carbon-neutral synthetic fuel. With carbon taxes imposed on traditional gasoline, this new low-carbon fuel will be cost-competitive.

The largest investment in electric vehicle (EV) infrastructure in history is underway. President Biden recently signed an executive order specifying that 50% of all new passenger cars and light vehicles sold in 2030 should be electric, in conjunction with the $1.2 trillion infrastructure bill. There are currently 41,400 EV charging stations in the country, and the new bill will raise this number to 500,000 charging stations installed across the country by 2030—that’s over three times the number of gas stations. Public transportation will also be transformed, with $7.5 billion allocated for electric busses.

Auto manufacturers are taking note of this sociopolitical shift: Volvo will phase out its current fleet to become an all-EV company by 2030. Volkswagen is giving Tesla a run for its money by aiming to become the world’s largest EV manufacturer by 2025.

Three major complaints about electric vehicles are that they can take hours to charge, cannot travel more than 250 miles on a single charge (390 for some Tesla models), and their expensive batteries often carry only a 50,000-mile warranty. Experience has shown that most hybrid and EV batteries outlive their warranties, with Tesla owners reporting 300,000 to 500,000-mile lifespans. Tesla’s new Supercharger takes only 15 minutes to provide 200 miles of power; however, Supercharger stations can be difficult to find on long cross-country road trips. Despite current roadblocks, the future looks promising. Researchers at Harvard have devised a game-changer: a lithium-metal, solid-state battery that could increase battery life to 10-15 years and pave the way for EVs capable of fully charging in just 10 minutes. This battery could be on the market for EVs in just five years.

Since 2009, Green Development has been instrumental in transforming the energy mix in Rhode Island to clean, reliable energy. The company has developed more than 70 MW in solar and wind capacity, with plans to add 75 MW in 2021. Green Development is devoted to preserving farmland, reducing water and air pollution, increasing energy security, and creating local jobs. Current wind and solar sites reduce carbon emissions equivalent to using 8,557,790 gallons of gas each year.